Back 2015 I had set myself some goals for my weight. The first 20 weeks were spent trying to achieve these goals. After a couple of weeks in the UK, and some 5kg later, for the rest of the year I was playing catch up to make the weight again.

I have brought some exercise into my left, though that has subsided somewhat recently. However general well-being as improved, my blood pressure now falls into the "normal" bracket and I am trying to get a decent amount of quality sleep. 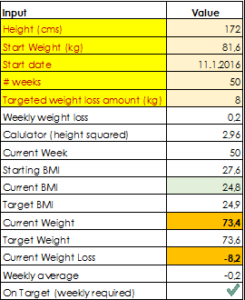 My Weight Loss Targets For 2016

I set my goals in 2015, but I decided to modify them somewhat to only go to #3 on the list. After 20 weeks I got there and achieved my goals. However the trip to the UK pushed my weight up again and I decided to try to get my weight back down to targets by the end of the year.

So, my target was subsequently modified to be a 50 week stint with Boxing Day 2016 the official final weigh-in.

My regular weigh-in time was Monday morning, as soon as I got up. I also took my blood pressure every week at this time. As I got a new toy for Christmas I have started to use these scales, however the final reading that I'm (mostly) using is from the scales that I've been using for the past year and a half.

I made it. 73,4kg. What a relief. It was was looking quite unlikely towards the end with the inevitable Christmas eating and drinking going on, but all good. Now I can really concentrate on changing the fat to muscle in 2017.

As with this time last year there were a couple of caveats to take to factor in. Perhaps not major ones, but still have an effect.

Last year, I used different scales on the final day. This lead to 1,6kg loss in the final week. Of course, I followed that up the next week with similar weight. This year again I lost 1,6kg the final week. This was on the same scales this time. However on my new scales, my weight is even less - there is a 0,6kg difference.

As with last year again the night before's eating habits were slightly different than normal. This time around, as well as eating dinner at around 5PM, I had to go to bed relatively early as I thought that Sophie's flu was on its way to me. A really long, and sweaty, sleep later I am sure contributed over all.

Normality. Hopefully. I know I will always have to be careful with what I eat. I don't think I need to lose any more. Just get some exercise.