My Weight Loss Status for 2018

So here we are again - another rotation around the sun. Did you have any goals with regards to your weight or physical well-being? How did you get on?

I made a fundamental lifestyle change in 2018 which may, or may not, have contributed to a slow year metabolism wise. I tried to go vegan but in the end and eventually went what could be described as flexitarian (or semi-vegetarian).

As I wrote back in February I set myself the ambitious goal of trying to lose 10 KG in 20 weeks. I wrote that I was halfway there already by March but I'm now making excuse after excuse as to why I didn't reach that goal in the specified timeline... or in the whole year for that matter.

I loosened the goal with the aim of completing by the end of the year as I wasn't really dieting per se. In addition I started a new job in May which had a detrimental effect on my exercise habits.

I still was drinking water like a boss but my only exercise now was walking to and from work. This does get me near to the 10K steps per day that I strive for. But no sweat, no hard breathing.

So in the end I have to settle with a meager 7,5 KG loss over the year. This means that I am aiming for another 5 KG this year through healthy eating alone. 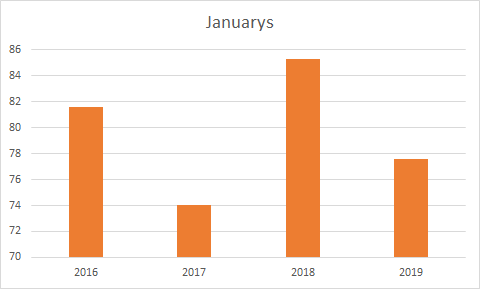 Above is my weight over the past 4 years in January

Hopefully I will be nearer 2017 weight again next year. Do you have any goals?