Last night I saw Reckless Love for the third time this year. Went along with Colin, with whom I go to most concerts of this nature, and a Reckless Love Virgin, Deano.

Nosturi was the venue and there was actually a pretty decent crowd. Are they finally going to make it? The crowd at the front contained mostly what sounded like school girls. There were some guys in the audience, but I guess we must have been close to the oldest there.

Undeterred by this fact, it was a great concert. Again their sound seems to be changing all the time. The last time we saw them we wondered whether the record label had told the other band members to be more involved? There were a lot more backing vocals and they were all beaming from ear to ear.

Last night was much the same, but they sounded more raw. Whether Olli was suffering a bit, with flu or similar, is open also. He didn’t seem as quite on form as normal. 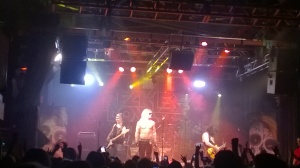 The chat was shit!! Only because it was in Finnish and I was pretty clueless what they were talking about. I am guessing a lot of it was about him talking his clothes off since the girls in the audience screamed wildly on more than one occasion.

I really like this band. The play music that would have been massive in the late 80s and early 90s. They sound like everyone, not just one band: Def Leppard, Van Halen, Motley Crue, Poison – you name it they sound like them.

But they have original songs and their set yesterday (although I’ve seen them do covers before) was all their own … 17 played last night.

You can see the actual set list on setlist.fm. If you have Spotify, check out this playlist.

Will add more pictures later, but if you get a chance do go and see them.