This year has been a cracker of year for live music for me. I’ve had one of the best festivals ever in Shout it Out Loud and my favourite performance of all time with the incredible Tesla… There was maybe the best “show” when P!nk came to town and Muse made amends for a lackluster performance in Malaysia a few year back.

There have been downers too. I’ve always questioned why it often takes singers a few songs to find their pitch. Why is that – don’t they warm up before the gig? This year thankfully that hasn’t really been the case. Rush and Geddy Lee took about 4 songs in 2011 to “hit it” – this time he flew off the blocks and was excellent throughout. I did however enjoy 2011 gig more due to the set they played. It was fun though.

Unfortunately 2 gigs in a row have suffered from terrible sound. Firstly The 69eyes gig in Virgin Oil was pretty OK. They played well and there was a great atmosphere. You couldn’t hear the singer though and the mix was pretty poor. Maybe he is just a bad singer and they down mixed him?

Soundgarden was terrible. Chris Cornell has one of the finest voices in rock music. Again you couldn’t really distinguish him from the barrage of noise that was coming from the other instruments. The whole thing was disappointing.

The ticketing website stating that they were sold out almost on the ticket launch date – the place was over half empty. Maybe Soundgarden were trying to project their sound to the anticipated larger audience and the acoustics therefore were out. But that is what your sound crew is for. And we were standing right my the mixing decks for the most part and to be honest … it sounded shit!!

I had high expectations for Soundgarden – maybe too high. I had the same feeling after watching Faith No More or Pearl Jam in Berlin …. maybe I don’t like grunge as much as I though. 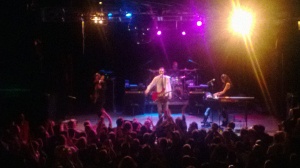 Soundgarden are there somewhere. The 69eyes very near the front. Didn’t sound good anywhere we stood.

Rant over, but if you want more information on the best festival ever and my favourite performance check out the Shout it Out Loud series of posts.