Finnish bands Santa Cruz and Reckless Love were featured in a recent article on VH1 about the current state of glam metal.

I found the article quite interesting and a bit of an eye opener. 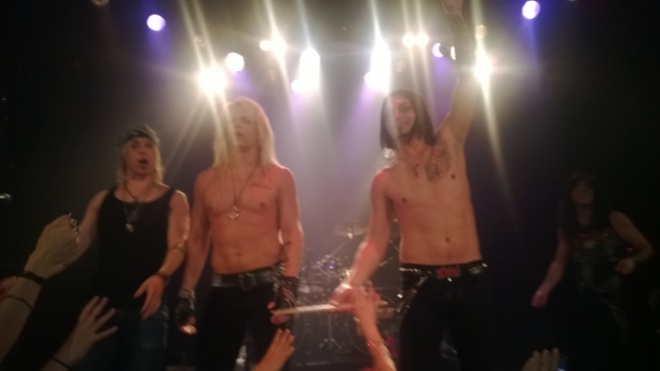 Having been a hair metaller in the late 80’s I, to my surprise, have never really given it up. My musical tastes have progressed a bit, really into female fronted rock bands right now, but the glam element such as the Poison’s and the Motley Crue’s has never really diminished.

Living in Finland you feel a bit isolated sometimes. Sure the big, old, rock bands do visit here, but when the greatest musical exports are Lordi and HIM – you have to wonder whether you are living in a bubble.

So when I discovered Reckless Love a few years back I thought that this was a local phenomenon. They got great reviews in British music magazines and rave reviews for their performances at the likes of Download Festival and their own mini-tours.

I love them. I have seen them a handful of times, got all their albums and even got to chat to them on a couple of occasions. Their shows are no nonsense, fun, pure rock and very energetic. They never disappoint.

They sound like every band from the late 80s / early 90s that you have ever heard of, from Def Leppard to Van Halen, but they mostly perform their own songs and they have their own distinct sound.

Santa Cruz initially, to me, sounded like Guns N’ Roses, but they really have developed their sound. They can really play too. I saw them a few years back supporting Cinderella.

I thought they were a US band since they were speaking to the audience with the typical US drawl, but then they burst in to Finnish. WTF.

Unfortunately I haven’t gotten to see them again, apart from one of the times they invaded the stage at a Reckless Love gig. That will change in June when I get to see them 2 days in a row 🙂

So I love these bands, and am extra delighted that they are getting some recognition at least elsewhere. Disappointed that H.E.A.T are not on the list though (Swedish though so doesn’t matter, right?)

TBH: I think that Santa Cruz now have the edge over Reckless Love and really wouldn’t be surprised if they get a bit mainstream in the not too distant future.

You can read the full article about the best new glam bands here.

What’s your favourite glam band of the moment? Ever heard of these 2 before?